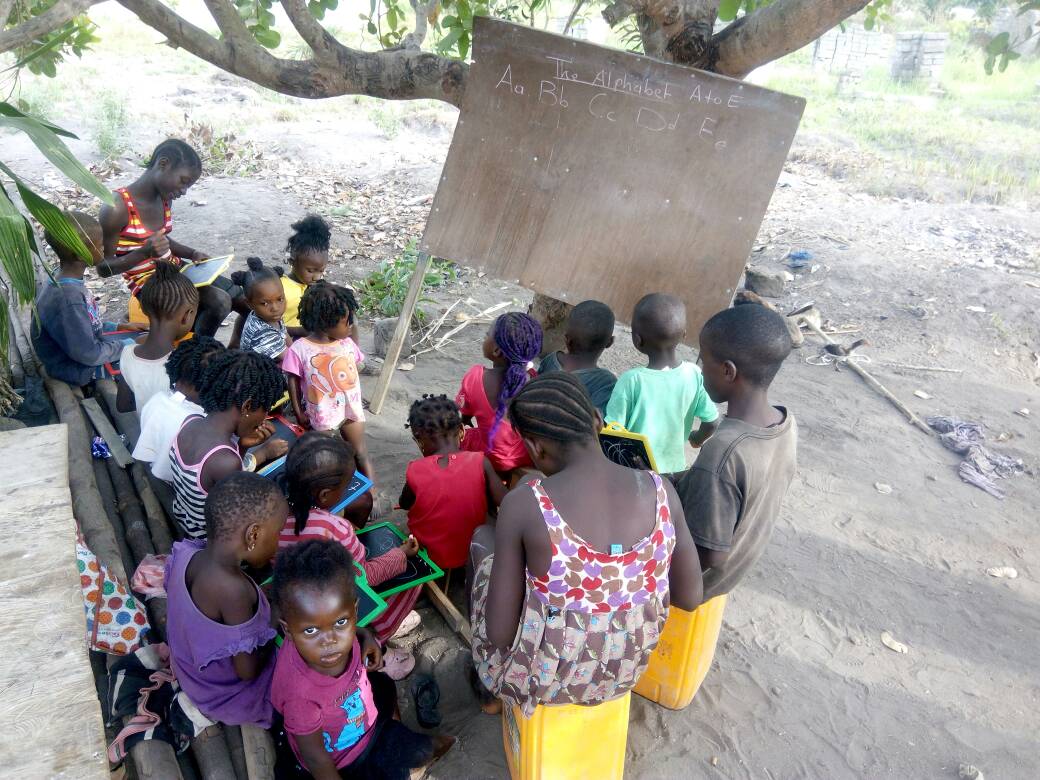 I will always think of Shieldra School as ‘the school which started under the mango tree.’

ARET agreed to make funds available to help in the building of a modest school. As this was a concept so unfamiliar to us I was very apprehensive. Communication with the Amputee area near Joetown is not easy but once more we put our trust in the people concerned, Jane, Alpha and Abdulai. Land was acquired and legally became the property of the community. With the help of Abdulai money was transferred and the building began. Alpha ordered materials and supervised the building and kept us updated with photographs but these photographs did not and could not tell the whole story.

It is difficult sending money to Sierra Leone. There are a great deal of security measures to put in place which of course is reassuring but it can be a long drawn out process.   Eventually the first installment arrived and materials for building bricks and other essentials were purchased. As with all the projects we visited Sheildra School is not just the vision of two teachers. It is the community vision and details were discussed by the villagers, the elders in the community, the Imam and the Pastor. By the time we visited the school the foundations had been laid and the walls were taking shape.

To keep costs down the village men were making the bricks and they were being given cooked meals  to keep up their energy levels.

The Community are currently awaiting the second installment of the grant which has been sent but it is taking its time to arrive. In the meantime the little class under the mango tree has grown and there are now three young teachers in training.  These teachers are being financed by other qualified teachers which highlights how determined they are to move forward and be active participants in the project. This way they own the project which will ensure success.

From under the mango tree the small class moved to a small room attached to Jane’s house to protect them from the tropical rain.  The room is now too small to accommodate all the children and thus they have  erected a temporary structure which will protect from the rain and sun.

It was a warm, dry day when we visited Shieldra School. We came armed with supplies and gifts from friends and supporters in the UK.  These were added to the other supplies which we had shipped out and will be kept for the new school. Jane and Alpha accepted these gifts which included a gravity lamp, the usual school items, picture books and soft toys. Whilst we use soft toys in classrooms in the UK I do not think it is a practice in Sierra Leone although this could easily be because of financial constraints. However Jane could see how they would enhance basic numeracy and language teaching. The children were each given two toys to keep and a lollipop. They were somewhat bemused by having a soft toy but as we demonstrated games and played with the children they were soon wanting to be involved.  The children, who had turned up in their best clothes to greet us, sang their thanks for the opportunity to learn. Unfortunately it is not possible to put the video on these pages but hopefully we will soon have a link  to a YouTube Channel. As we observed the children, it was clear that the relationship between them and the teachers involved was very, very special.

Unfortunately the visit was too short. I would have liked the opportunity to speak with the two young women starting their training and a young man who also hoped to become a teacher. There were other administrative matters to deal with and a delicious lunch to eat before starting the long journey to Rogbonko Village. Jane cooked the meal and was responsible for Rachel’s new found passion for Groundnut Soup and the trip to Makeni market to buy the ingredients to cook it at Rogbonko in a traditional manner.

It is difficult to describe the pot pourri of emotions a visit such as this can stir up. There is amazement at the steps taken by a community to educate their children; pride in being able to be part of it and a sense of bewilderment that what we demand as a human right is denied to so many. The people of this Community deserve to succeed and be supported. We look forward to visiting again.

When we returned to Freetown I took the opportunity to read some newspapers. President Julius Maada Bio has education at the top of his agenda. His speech concerning education was published in the newspaper I was reading. Free education was to be made available to all children but they would need to buy school uniform, books, jotters and pencils. He warned against well meaning philanthropists building schools as part of Rural Initiative and then expecting the government to pay the salaries. He also advised against foreign NGO’s assisting with building and then implementing their own curriculum.  Sierra Leone has a National Curriculum and I agree wholeheartedly that only the National Curriculum should be followed by the children. However a few teachers I spoke to queried how long they would have to wait for a school to come to their community and what provision would be made for the children in the meantime. Whatever the outcome the building of Shieldra School can only help the community move forward.  Should a bigger and better government school become available the more modest Shieldra could be put to many good uses. It is after all the property of the community.

Today I received photographs from Alpha. Jane had kept larger toys aside for the children to be shared in school. Here they are playing with toys. The colours they have chosen for the school are purple white and black. Some of the  girls are wearing dresses run up by a local seamstress.