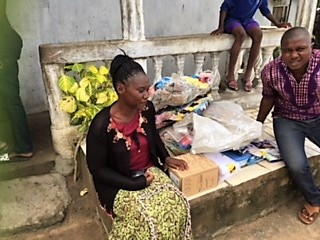 Our next stop on the tour was Shieldra School. The money had arrived, the land acquired, paperwork completed and building materials purchased. To keep costs down the villagers are building the bricks and the school themselves. They are working for a  small fee and there energy levels are being maintained with a feeding programme. This small school will truly belong to the community.  Shortly after the start of this project President Bio’s speech concerning education was published in the newspapers. He warned against schools being built privately in the hope of securing the free education benefits.  When I raised this concern, I was asked how long will we have to wait for a school to be built for our community? Equally why should the small children have their education delayed? In these communities there is not just a desire for basic education but there is a real passion. I do have to agree with President Bio who warns against enthusiastic, foreign philanthropists who want to build a school and implement a more ‘westernised’ curriculum. Naturally this can hinder the success of the school population. Sierra Leone has its National Curriculum and National exam structure. It is only right and proper that the pupils are offered the curriculum of their country. This is not going to be an issue at Shieldra School. The school belongs to the community and the teachers concerned are either being trained or have been trained in the system.

Whilst the school is being built the children are being taught either under the mango tree or in a small room to the side of Jane’s house. We were shown into this room which was literally crammed with little children who had come specially to say thank you. They showed us what they had learned and sang some very special songs. We had been given toys and puppets for the children mainly donated by Home-Start Stirling and Loving Hands Charities. The children were a little unsure what to do with the puppets and teddies  but as we left were  beginning to play with them. Some of these toys such as large, soft dice and cars and little figures would lend themselves to teaching aids for number. The surplus toys were carefully put with the two large bags of basic educational tools. Included in the bag were sports medals and trophies and no doubt once they are settled a sports day will be organised.

We visited the site to see the progress made and spoke with the Elders, the Imam and the Pastor. There was strong empahsis that everyone was involved, everyone wanted the school and everyone would make whatever sacrifice they could to ensure their children had education.