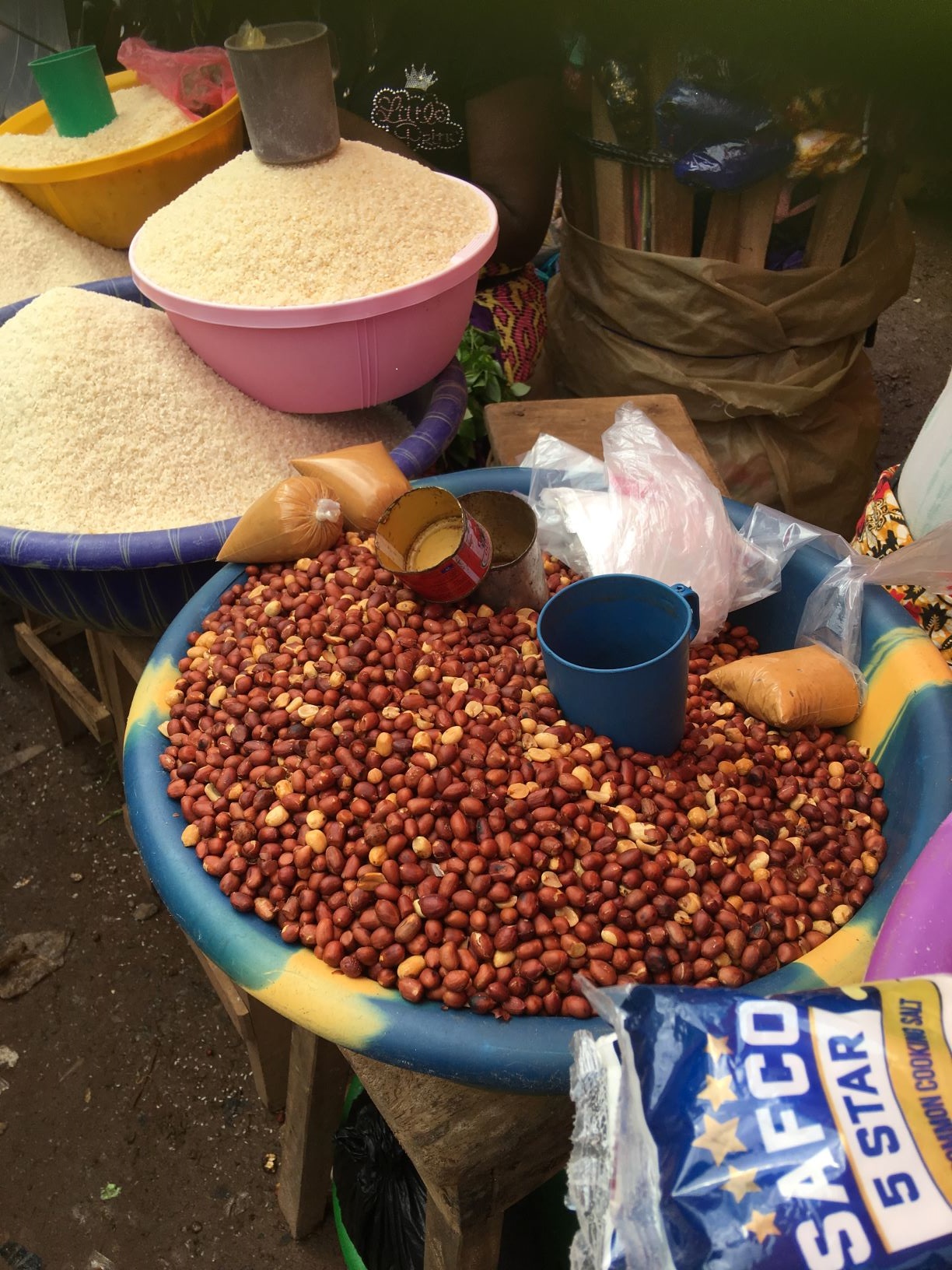 Rogbonko is in the Tonkolili district of Sierra Leone. and Magburaka is the main town of the area. Once you leave Magburaka you come to  a dirt track which winds it way through fields leaving electricity, running water and telephones behind.  Just when you think you really need to stop and stretch your legs you come to Rogbonko Mathaka…. The Place in the Forest. The people are mainly subsistence farmers and traditional artisans and their contact with the modern world is very limited. There is a village retreat for visitors which is run by the village and contributes to the economics of the village.

I was originally attracted to this village because of its connection to Scotland but that is another story. This visit had quite a few objectives. We wanted to catch up with Kemohkai and find out how his university application was progressing; we needed an approximate figure for the university fees and accommodation; we had blackboards to deliver to Abbas and a box of school supplies and some books. We also had ingredients to make Ground Nut Soup after a visit to Makeni Market.

We visited during the rainy season and the road through the village was quite muddy but given we are used to wind and rain in Scotland this did not perturb us in the slightest. At least in Rogbonko the rain is warm.  Abdulai and Idrissa are ‘well kent faces’ in Rogbonko and there arrival causes some excitement amongst the children. It meant that at some stage lollipops will be given out.

The visitor huts are set just apart from the main village street and the very young children are not allowed in that area unless invited. When the rain stopped we had settled in and ready to prepare a meal.  The little children sat in groups watching and waiting but as darkness fell they returned home. Perhaps lollipops would come tomorrow.

The accommodation set aside for visitors had suffered storm damage. The roof of one hut had caved in but the other had tarpaulin over the thatch which meant it would be dry inside. Each room is furnished with two single beds each with a mosquito net. The windows have no glass but blinds and shutters give privacy.  The toilet and bathing facilities are hygienic but quite basic. From previous experience I learned that a head torch is invaluable as it is quite dark inside the rooms.

At night the sound of crickets is loud and punctuated with the sound of other unidentified animals. Then, silence. It is a strange silence but you only have a few seconds to think about it as suddenly a crack of thunder suggests the ground has opened up, lightning fills the room and the torrential rain batters the building. The storm lasted a while and the rustling in the roof suggested some animals had taken shelter there. There was no point in worrying about it.  Should the animals  have fallen through the roof into the room then we were safely tucked under the mosquito nets.  That night I felt quite cold and thought longingly of a warm blanket. The following day the puddles were soon dried up with the sun.

As we ate breakfast older children started to arrive and Abbas was keen to start the morning session and then talk with us.  The little children watched from the boundary and waited. No lollipops yet.

On our first visit to Rogbonko Abass had expressed a wish to tutor children with potential.  We had sent basic school provisions and requested text books. This time we arrived with more basic items, books for the library Abass wants to create and blackboards. What we were not prepared for was the development that had taken place since the first visit. The story was gradually pieced together and can be read in more detail as part of Abbas’s story in the blog.

The morning extra-curricular class started and Abass chose to revise English grammar with the children. I had a quiet smile as I thought how many Modern Language teachers would appreciate their pupils having the grammatical knowledge these children had acquired. Abstract nouns, collective nouns, verb tenses, adverbial clauses, possesive pronouns and conjunctions all named, examples given and used in sentences! If the young people wish to progress through to Further Education they require a good command of the English Language. The children had been in Magburaka  all week at school. They had walked to Rogbonko on Friday and were understandably tired.  They seemed pleased when the village chief arrived to greet us and class was abandoned for the morning but equally were keen to show off their progress in other subject areas.

The Chief came to greet us and thank us for the interest we had shown in helping some young people realise their potential. He wanted us to meet with the parents of the children concerned so that he, the Chief, could explain what was happening, what we could support and the input the parents should make. Keeping a child in the secondary school and away from the field involves considerable sacrifice.

Once more I was struck by the way in which the community was planning education to help their children’s progress. The Chief considered achieving maximum potential in education of high importance and spoke to parents and encouraged them