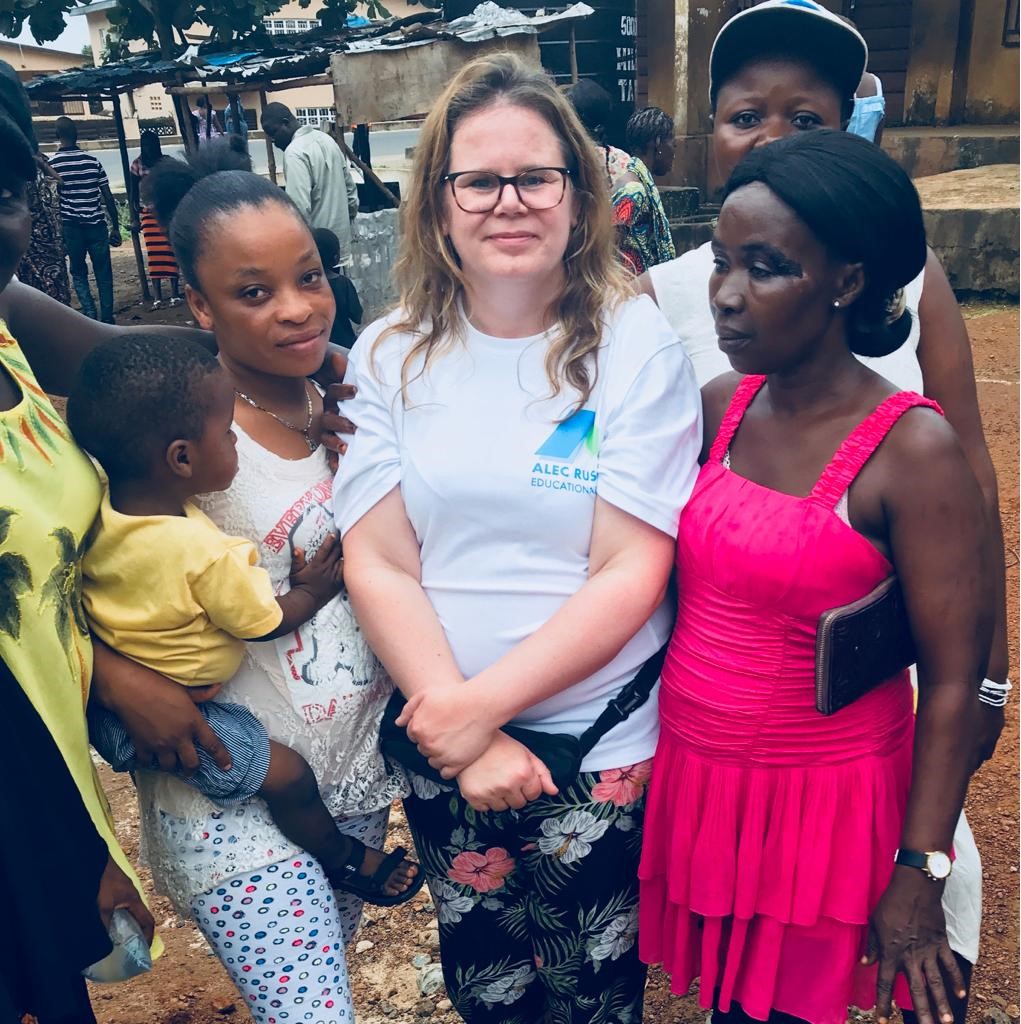 I was not sure what to expect when we visited the Project. I had thought that perhaps we might slip into a class in action and quietly observe the teaching and learning and  perhaps we would have time to talk with the teachers and pupils. This did not happen. The class room we were directed to seemed quiet.  Perhaps the students were  engrossed in their latest learning. No, they were not. As we stepped into the room there was an onslaught to the senses. Laughter, greetings, a song of welcome, people waving, nudging each other, making comments and wanting to shake hands.  The typical Scottish staidness had no place in this room. This was a room of celebration. The students were celebrating what I have taken for granted all my life and that is the opportunity to learn.

We were asked to sit at a table facing the students and the official part of the visit began.

Mr Abdulai Sankoh, the instigator and manager of the project, went through the formalities of introductions; he stated the aims of the projects with the students throwing in their comments, thanks and agreement.The teachers, Mr Swaray and Mr Turay, spoke of the classes, the early struggles experienced and the hopes for the future.

The students were invited by the teachers to show off their progress which they happily did with such pride. The very positive ethos in the room was tangible. Those pupils who stumbled and faltered in their performance were encouraged by their peers and congratulated and applauded when they sat down.

After a delicious meal, cooked by Mrs Hassanatu Sankoh,  which we all shared, it was time to mingle. The individual stories were touching and attitudes so positive. What was becoming quite clear is that this is not just about adults receiving basic education this is a community who were being empowered by hope and daring to dream.

Although Mr Sankoh volounteered to manage the project and Mr Swaray and Mr Turay to teach basic literacy their roles took on other responsibilities.  Women who never had the opportunity to learn were the first to register interest. Many of the husbands were not so supportive of them  but as the team visited the homes they managed to break down barriers. The women who attend are eager to learn and their families are supportive and encouraging. The nursing mothers are welcomed and young children accompanying the mothers are looked after by everyone. A visitor could not help but notice the camaraderie of the group. This has also been fostered outside of the learning situation. Those who are ill are helped with medicine and  those who struggle to eat are discretely helped with food. Not everyone’s learning needs can be met in the allocated class time but the team create opportunities to address specific issues. For example an individual had great difficulty understanding the ‘log in and log out’ required of him whilst working. How to calculate the accurate time spent working puzzled him and no-one had shown him how to do this. He spoke to Mr Turay who arranged some tutoring time for him. The problem was taken care off. Others came forward with their numeracy   issues and now a group want to develop a basic maths class. Given the traumatic recent history of Sierra Leone it is hardly surprising that many adults suffer from depression and mental health issues and  unfortunately the women can experience domestic abuse. Thankfully the positive ethos fostered in the group means that the women  are becoming more vocal and willing to ask for help. Apparently some potentially nasty situations have been resolved by timely intervention.

Even although we spent a very short time with the group we are not surprised that there is considerable interest from other communities and that there is a waiting list of 150 people who also want the opportunity to learn.

One of the oldest students is Haja. She is a lady in the community of some standing. If people are troubled they go to her for advice; if people are ill they consult her about affordable medicine; if people are in dispute they turn to Haja to act as a mediator; if people have to deal with bureaucracy Haja will accompany them. Haja could not read or write but she decided she was not too old to learn and grasped the opportunity. Her family are quite rightly so proud of her and we were full of admiration as she stood up and volounteered to spell words. We hope she will continue to be part of the class for many years to come.

Another young woman grabbed my arm and said she wanted to speak with me. I should point out that there was a decision made by the students that classes should be conducted in English which would improve their English language skills. She told me that although we had regretted not being able to put everything in place at once but would attempt to help them meet their aspirations step by step she felt that so much had been achieved already. She held up her thumb and said, ‘This was my name.’ Whenever she had to sign something her thumb print was her signature. ‘Now,’ she added, ‘I have dignity. I write my name.’

It was time for people to go home and as we took the precarious path to the central yard there was a very grand, gleaming and polished white vehicle. A student ran towards it and greeted the chauffeur. The puzzlement on my face must have been very obvious as people around laughed. Apparently the student is a domestic maid and about to lose her job as she could not read even a simple list of work to be done or items bought at market.  When she heard about the class she enrolled as fast as she could and told her employer that she was making a big effort to learn to read and write. Her employer was so impressed that the car and chauffeur were made available to take her to class after her day’s work and the chauffeur would wait to take her home.  (The chauffeur is the individual who had such difficulty with ‘logging in and logging out.’ )

The motto adopted by the students is Learning to Learn. They realise learning is  life long  and that a healthy body helps the learning process. Thus they are embracing exercise. Weather permitting they will gather for a group hike up the hill at the back of the community.  It also encourages team building. Haja insists on being part of the group, nothing will dissuade her. She participates as much as she can helped by the younger and fitter members.

We were genuinely sorry to say goodbye to the students and look forward to meeting them again. Next time we want to be with them for a longer period.

So many hopes and so many dreams. ARET have asked the team to prioritise their needs and to have a development plan before the next financial year. Until then they continue with the agreed budget.  Very obviously this project wants to develop not only in the provision of more classes to enable more students to attend but also to allow a progression. Here are some of the ideas that they had explored:

As the country moves into its new government (whose priority is Education) we hope that there eventually will be little  need to help children go to and progress through schools.  Funds can then be concentrated on projects such as this.

ARET would like to thank everyone who has made a contribution to this very worthwhile project. All monies go direct to the need and we are quite amazed at how effectively and innovatively it is being used. Throughout the tour we repeatedly heard the Sierra Leone proverb:

‘So you want to sit in a tin bath and have your back scrubbed? So, how and when are you going to provide the water?’

Everyone has a part to play. The givers and the receivers. In that way the communities have ownership of the projects and are more likely to succeed.